Sometimes referred to a moving meditation, Tai Chi does have that benefit, yet becoming more relaxed and calm are only the start of what you can obtain from doing 15 minutes a day of Tai Chi.

With decades of experience, Master Ch’ng is an expert for both learners and advanced students. With clear instructions he makes sure you have the correct movements as well as an understanding the movements. Centrally located in Essex Tai Chi with Master Ch’ng is accessible by most of the county and some come to learn from outside the county too.

What is Tai Chi? 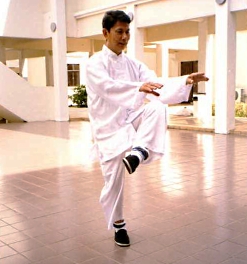 Generally people think that Tai Chi Chuan is an exercise to keep fit and healthy. Some see Tai Chi as a slow moving effortless dance which is easy to do. They think it is for old people and not for the young. Well, they are partly right and partly wrong.

Yes, it is a slow exercise to keep fit and healthy, but it’s not only for old people. Starting in your youth ensures the best health for your entire life.

Along with it being one of the best health exercises, it is also one of the most powerful forms of self-defence. It does need proper training and practice to be effective. For both health and martial arts defence one needs to have a learned master for guidance  through the forms, clarifying every step. It’s a training of perfection.

That is why it is called Taiji, meaning the ‘Grand Ultimate’ represented by the Yin-Yang symbol. This Yin-Yang symbol represents the origins of matter and life, or the protons and neutrons of a nucleus; the substantial and insubstantial. Tai Chi Chuan is a practical application of Tai Chi philosophy.

There is more on who Master Ch’ng is in the history, an overview of the forms, what ‘push-hands’ is and where you can get Tai Chi training venues in Essex. And contact Master Ch’ng if you’d like to find out more.

We use cookies on our website to give you the most relevant experience by remembering your preferences and repeat visits. By clicking “Accept All”, you consent to the use of ALL the cookies. However, you may visit "Cookie Settings" to provide a controlled consent.
Cookie SettingsAccept All
Manage consent

This website uses cookies to improve your experience while you navigate through the website. Out of these, the cookies that are categorized as necessary are stored on your browser as they are essential for the working of basic functionalities of the website. We also use third-party cookies that help us analyze and understand how you use this website. These cookies will be stored in your browser only with your consent. You also have the option to opt-out of these cookies. But opting out of some of these cookies may affect your browsing experience.
Necessary Always Enabled
Necessary cookies are absolutely essential for the website to function properly. These cookies ensure basic functionalities and security features of the website, anonymously.
Functional
Functional cookies help to perform certain functionalities like sharing the content of the website on social media platforms, collect feedbacks, and other third-party features.
Performance
Performance cookies are used to understand and analyze the key performance indexes of the website which helps in delivering a better user experience for the visitors.
Analytics
Analytical cookies are used to understand how visitors interact with the website. These cookies help provide information on metrics the number of visitors, bounce rate, traffic source, etc.
Advertisement
Advertisement cookies are used to provide visitors with relevant ads and marketing campaigns. These cookies track visitors across websites and collect information to provide customized ads.
Others
Other uncategorized cookies are those that are being analyzed and have not been classified into a category as yet.
SAVE & ACCEPT